I love to have a glance at the Couture catwalks every season, the quality, the creativity and the uniqueness of the pieces are captivating to look at. Here’s a quick round-up of the a spring couture ‘12 Paris catwalk shows.


Pure luxury: lace, embroidery and appliqué. The collection had an 18th Century influence, harking back to those iconic figures like Marie Antoinette.
Designers Paolo Piccioli and Maria Grazia Chiuri presented a beautifully delicate collection in the grandeur setting of the salons of the Hôtel Salomon de Rothschild. The models elegantly draped in floor sweeping gowns, scattered in poesy prints, organza lace cutouts, with high-embroidered necklines, and taffeta fabrics, which had an Antique appearance. A dreamy and ethereal collection.

Images via: Style.com
Christian Dior has a new man in charge, Bill Gaytten, who reverted the charm back to the brands origins and history of Dior’s ‘New look’, cinched waists, peplum jackets, and exquisitely constructed tailoring.  Pleats a plenty, mock-croc leather accents and even a dosage of checks and flower prints made up the beautifully crafted creations.


"All the structure of iconic Dior, thanks to lots of fittings, but all of it see-through," - Bill Gaytten

“Welcome to Air Chanel, we are ready for take off”…
Renown for incredible set designs the Chanel runaway was an aircraft/ space shuttle… referencing the old school glamour of Pan Am perhaps?
With 150 different shades of blue the drop waist relaxed looks had an elegant twist with beautiful shimmering fabrics, 1920’s foundation with futuristic cuts and silhouette. Chanel went to infinity and beyond.

Images via: Style.com
Delicate, dainty and pretty were the orders of the day at Ellie Saab. You can see why his dresses are a firm favourite with the celebs on the red carpet, they are feminine yet not too girly, they are figure flattering and well-designed. You could easily imagine every single pastel shade of gown that was presented, as a possible Oscars candidate.

Images via: Style.com
What an interesting collection, one which caught the eye from the other Spring couture offerings, wearable tailored pieces with a sharp military edge, diffused with delicate flowing print dresses and blouses. Each look was carefully thought-out, a classic item for every woman’s wardrobe. Accents of fur and cosy snoods reminded me of vintage trimmings, which can add a unique touch to simplistic garment as Bouchra Jarrar proved.

Images via: Style.com
The artistry of Ricardo Tisci collection was evident, with highly executed pieces some of which had been claimed to take up to 350 hours to complete. Tisci inspirations were apparently a few obscure twenties films: 1927 Fritz Lang movie Metropolis and 1924's Aelita: Queen of Mars. The influence of which were most clearly defined with the Art Deco embellishments on the dresses.

Images via: Style.com
Extravagant, exotic hued flowerbomb explosion, the models resembled some sort of icons of a perfume promotion, painted faces to match their assemble.
“There was scarcely an outfit that wouldn't have worked a miracle in a Hollywood film from the thirties or forties or fifties that called for the heroine to wear "fashion”. ” – Style.com
Designer Mabille is said to have been inspired by these two iconic photographs for the collection:

Images via: Style.com
A relatively new line added to the Armani portfolio has seen many outings already by the stars at various award do’s. The spring collection had a futuristic mixture of fabrics and invented seas of the underworld colours, representing the theme of metamorphosis with particular emphasis on the snake.
Our money is on Jessica Chastain wearing Armani Privé for the Oscars considering she found out about her nomination on the front row.

Images via: Style.com
This was the first outing on the Paris Couture schedule since 2004 for Atelier Versace range. The dresses are designed to wow and accentuate the figure, while cleverly hidden panels illusionary contour, while added inserts changes the figure in various places on the hips and waist.

“Evoked Thierry Mugler's eighties glory days on the one hand and the movie Metropolis on the other” – Style.com
Retro underpinnings with a full contemporary slant.

The Golden Globes dresses of the ceremony initally didn't excite as much as last years... see here as I don't think there was as much variety and vibrancy. However I must say many have started to grow on me with a few favs in between. The eaiest way I saw to catorgise them was intially by colours as the palette was overly adventurous 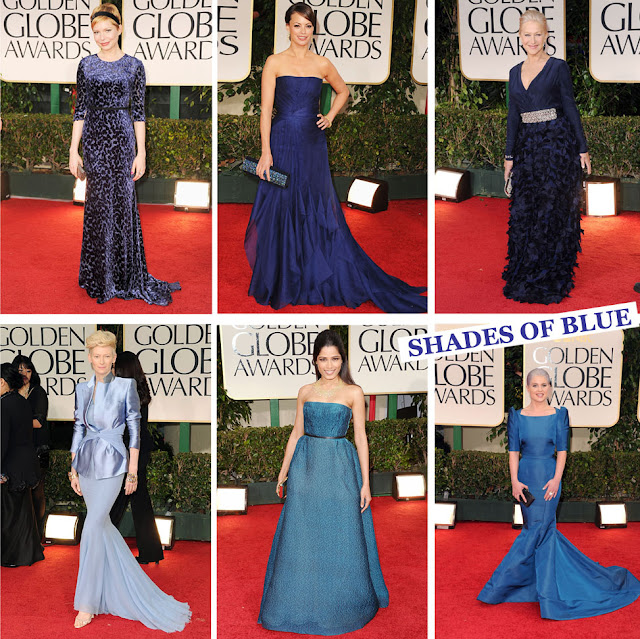 Poor Michelle Williams who received alot of criticism for her choice of a Jason Wu dress which was kindly likened to granny curtains among many other things, still managed to steal the show by scooping the Golden Globe for actress in a musical or comedy as Marilyn Monroe in “My Week with Marilyn" as deserved. Personally I don't find her assemble for the awards that highly offensive and I can only salute her for wearing a dress which she not only appears comfortable in but exudes confidence, surely this is much more the point than going against the usual "award gown" grain. It would of been nice if she had worn something of heritage, inspiration perhaps from the old school glamour that Marilyn Monroe embodied... however maybe this may of been far too expected. The addition of a vintage fred leighton headband completes the elegant 1920's gamine look.

Berenice Bejo the stunning french star of the Artist wowed in deep cobalt blue floor length Gucci gown which apparently was "a very last minute choice"-THR which they report as an Emilio Pucci although a number of others report it as Gucci Première, If anyone knows which it is please do let me know. She teamed this with a vintage navy blue Daniel Swarovski clutch, Rene Caovilla heels, and Chopard jewelry.

Dame Helen Mirren seems to show the "young hollywood" how it should be done time and time again, she looks absolutely incredible in a deep federal blue Badgley Mischa gown with cascading origamni ruffles. The jewelled band excentures her slender figure and is matched
with a dazzling clutch and vintage fred leighton jewllery.

The lady who can do no wrong in most fashion books teams and Androgyny with femininity perfectly. I must say this is a difficult look that would be hard to carry of which only Tilda Swinton knows how, the cut blazer in silver blue crossed by flowing organza. This is by far my favourite Swinton number I have seen for a while.

The last two... honestly were not my initial cup of tea and felt slightly disappointed with Freida Pinto's Prada number however in this image above it looks far better than it did from a side perspective photo I saw and has to be given credit for the geometric lined shaping which is rarely seen on a red carpet.

Kelly Osbourne... well I had to include her, for she is the E's style commentator of the evening! In a Zac Posen structured body dress, which yes shows off her amazing figure but reminded me far too much of Tulisa's xfactor fishtail disaster. As Joshua Alston and Hadley Freeman comicaly summed up on their Guardian live golden globes blog: " 7.44pm: Joshua – I was just about to ask you about the "fish tail," Hadley. Is that a massive trend or is Kelly Osbourne just employing the "say things assertively so people will think you know what you're talking about" technique? I'm assuming it's the latter" 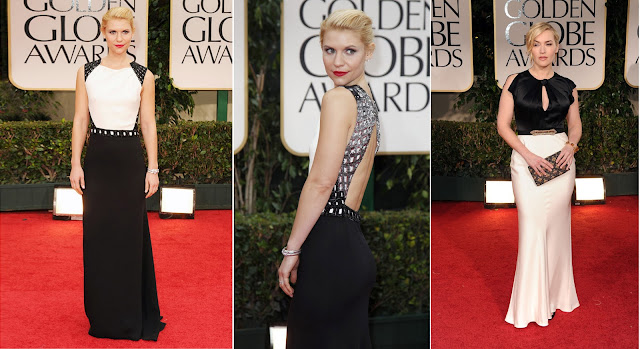 Two British ladies who always dress impeccably with sophistication and class with knowledge of the styles that suit, is Claire Danes & Kate Winslet... given they are a little bit boring,  nevertheless they still appear groomed to perfection:


Claire Danes wore a monochrome dress by J Mendel with a spectacular open back, which captured all the press attention so it did it's job.

My stand-out of all of these crimson beauties has to be Dianna Agron, of Glee fame, in a intricately cut Giles gown, teamed with classic red lips. Accessories were kept to a minimum however delicate vintage jewellery from from Fred Leighton (including a 1920s onyx and diamond bow bracelet) completed the "modern-day Grace Kelly look".
Reese Witherspoon with her signature tousled waved hair wore a figure huggin strapless red taffeta dress from Zac Posen's Pre-Fall 2012 collection matched with Fred Leighton's diamond drop earrings and vintage diamond bracelets in platinum.
Stacy Keibler main accessorie was her man on her arm aka George Clonney, however she opted for a simple silhouette of red Valentino dress which had a bow detail in the back finished with a a splash of Chopard jewels and a slim black frame clutch.
Headbands:

A number of stars decided to add some extra pizazz to their outfits by adding a jewelled headband to their casual hairstyles. Hair accessories were seen all over the catwalks and it seems the celbs were keen to follow. Michelle Williams supporting friend Busy Phillips sported a thin band, while Charlize Theron and Michelle Williams both rocked ‘20s-style vintage headbands and Eve Mavarkis went for a thick ribbon embellished band. Charlize Theron wore a pale pink Dior couture dress which she teamed with a breathtaking 1920's diamond Cartier Collection headband. Michelle Williams accessorised her super-cute pixie crop hairstyle with a vintage headband by Fred Leighton. 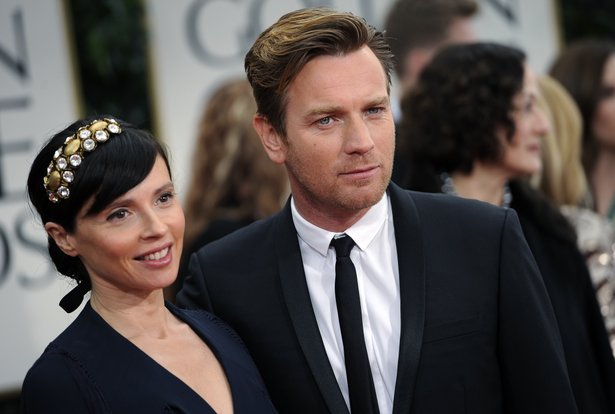 What a handsome couple... and Eve Mavrakis and husband Ewan McGregor. Her dress is beautiful and so far I am assuming it could possibly be a vintage number as I am yet to find out who the designer. Her headband is also abit of an enigma but I believe could be Chanel... again I could be wrong, but I am a little in love with these two. 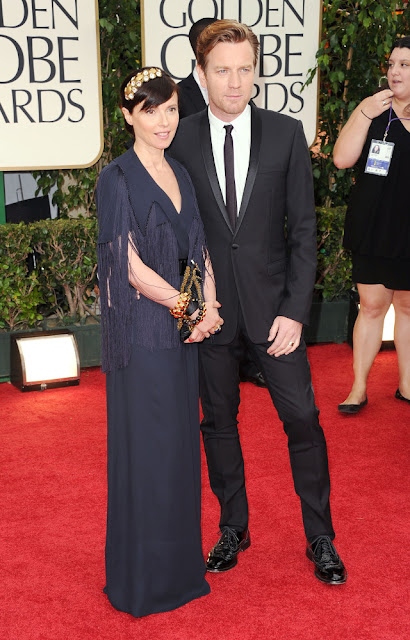 0 comments
Email ThisBlogThis!Share to TwitterShare to FacebookShare to Pinterest 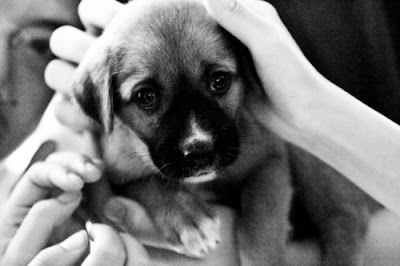 Firstly may I apologies for my lack of posting as of late... I have been seriously rubbish and not entirely sure where all the time goes. I had noticed some of my other favourite bloggers had been in the same predicament recently especially after christmas, lack of blogging inspiration and what not, yet they all seem to be getting back into gear so it has given me the kick start to do so too.

I have missed blogging on my own blog as although I was never too far away from it doing it now for work, it is a shame that I let this one slip. I have had more that enough blogging material on the brain but somehow never got round to posting any of it up. But now in a new year... new start hey!